Grounded LLC is owned and operated by Angela Curtes who bases her operations in the heartland of the Midwest in Southeast Wisconsin on her family's 80-acre farm.  The land is nestled in the rolling glaciated hills of the Mid-Kettle Moraine region within the beautiful headwaters valley of Cedar Creek that flows to the Great Lakes.

Historically, the farm was an organically farmed dairy since the late 1800's, up until the early 1990’s. The farm returned to its organic roots in 2008 removing chemicals, synthetic fertilizers, and genetically modified organisms (GMO) from its slate.  The farm’s 40-tillable acres are in mixed flowering legume & grasses for hay production. Today, the farm is preserved in perpetuity by a Conservation Easement held by the Ozaukee Washington Land Trust and smaller acreage is Certified Organic through MOSA Certification Agency.

Biodynamic farming principals further shape the farm and are incorporated into all its endeavors.  Restored and managed forests, pollinator prairies, and tree and shrub hedgerow buffers provide the scenic and ecological back-drop of the farm's beauty and resilience. The farm’s diverse landscapes reflects over 30 years of land stewardship by the Curtes family.  A heat-controlled biodynamic compost system lies at the heart of the farm.  From here, all things are possible…resulting in Grounded born medicinal crops for animal and human well-being including Alfalfa-Grass Hay, Echinacea purpurea (Purple Cone Flower), Calendula, and cannabidiol (CBD)-rich Industrial Cannabis Sativa Hemp.  GROUNDED LLC operates a medium-scale compost operation, offers educational workshops, and consultation in hemp production and compost system design (small to large).

Grounded LLC invites local talented farmers to its large-scale projects and receives the gracious support from her brother's Steve and Jay, parents, extended family, friends, colleagues, and volunteers for its small-scale projects.  Creating and offering family and community participation opens the door further to all things sacred and worth-lived. 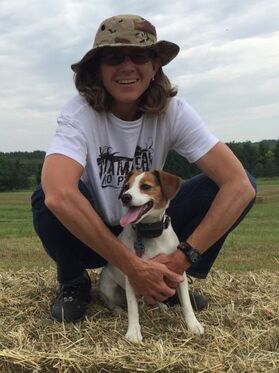 Angie Curtes and best pal Cove.
About Grounded LLC Founder
GROUNDED LLC was created by Angela Curtes in response to what she believes is a strong need for re-building healthy, living, and nutritive soils for long-term food production, soil and natural ecosystem resilience, and healthy development of the individual.  A native of Wisconsin, Angie has worked for over 30 years in the fields of environmental and wilderness education, natural and farm land preservation, and soil fertility and compost production and education.

After graduating in 1992 in Environmental Studies and Alternative Education from Prescott College, Arizona, Angie co-founded and co-directed ‘Common Earth: Educational Adventures of the Earth and Mind’ for 8 years in Marin, California and worked for 4 years as an Educator and Education Director of the Pacific Environment and Resources Center (PERC), an international non-profit.  In 2000, she moved back to her family’s farm in Southeast Wisconsin where she began working for the Ozaukee Washington Land Trust as their Lands Specialist and Assistant Director guiding natural area and farmland preservation efforts to preserve over 2,000 acres in 7.5 years.  From 2008 to 2011 Angie was hired as the Program Director & then Acting Executive Director of Yggdrasil Land Foundation, a national biodynamic and organic farm land trust.

In 2012 Angie worked on land preservation efforts in East Troy, WI for Skylark, Inc. and Christopher Mann where she helped to develop a land preservation strategy to protect 900 acres for organic and biodynamic agriculture, research, and education.  Her interest in biodynamic agriculture led to a 2-month intensive study in Southwest Germany, working with mentors Roland Ulrich and Bruno Follador where she studied the 12th-century controlled heat fermentation compost method integrated with biodynamic farming principles. She also studied and practiced the use of chromatography, a laboratory picture-forming method that captures the etheric life forces in substances, specifically as they relate to soils and compost.  On her return to the U.S. Angie designed and implemented a large-scale compost pilot project in East Troy, WI on an organic certified dairy farm.  She also implemented a chromatography lab to test base farm soils and compost qualities that continues today.

Be Grounded for LIfe!