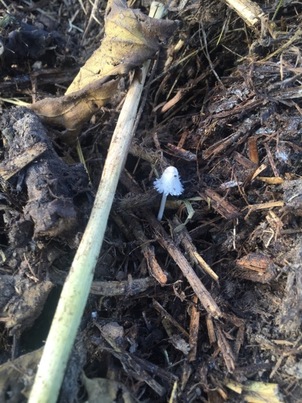 The common ‘ink cap’ mushroom- Coprinopsis atramentaria- thrives in the first month of hot compost.
The Foundation
An effective compost system sits at the heart, the foundation, of any food production effort. It is essential in building microbial activity and humus structure in the soil to provide healthy, nutrient rich foods.  Yet not all composts are created equal.

The Challenge
There are as many types of composts as there are qualities of those composts. A poorly digested compost heavy in unbroken down organic matter taxes the soil microbes, because they must then activate to finish digestion taking invaluable nitrogen from the soil to aid in the decomposition of the carbon and organic matter.  Spectrums of decomposition strategies range from slower, cold composts and vermiculture (worm based compost) on one end to heavily turned and mechanically pulverized compost on the other.

Compost from either end of the spectrum can have detrimental effects on soil microbial life and in-turn less nutrients are made available for plants.  It is especially problematic when these composts are applied to soils that have lost their microbial function due to years of chemical and synthetic inputs and are no longer able to properly digest and incorporate raw manures or undigested compost.

The Answer
Controlled Heat Compost lies in the middle of the decomposition spectrum.  This method of composting creates an environment where heat loving thermophile bacteria and fungi live, thrive and digest rapidly when conditions are right. The resulting humus-structured compost plays a vital role, not only in building soil fertility, but in creating a resilient humus layer that responds to growing climate shifts through moisture retention and gradual nutrient release. Controlled heat compost enhances microbial activity which are the foundation for proper nutrient transfer to plants and nitrogen fixation.  It provides insoluble and stable nutrients that release over time.  Due to its heat capacity, this method is especially effective in killing pathogens and weed seeds, and reducing and/or isolating chemicals and GMO's.  Controlled heat composting dates back to the 12th century in Europe and was brought to the United States in the 1930's by Ehrenfried Pfeiffer who developed some of the first municipal compost systems in the U.S. Roland Urlich has written an in-depth guide to this method, "Creating Humus on the Farm- The Controlled Heat Method of Composting" now available for purchase on this site.

Be Grounded for LIfe!